For my 16th birthday, I wanted to have a pirate party.  For the last few years, I have been designing my own birthday parties (with my parents' assistance), and my friends and I have always have a blast.

For my party, I sent invitations to my friends, in the form of a letter from "Captain L. Dubloon, Notorious Pirate," that said they had been selected to be a member of the "Jolly Bob" crew.  They would first get an orientation on how to be a pirate, then join the captain in a feast, maraude on the high seas, looking for a treasure map, and when the map was found, try to find the treasure.

What ended up happening is we did the treasure hunt first, since it was dark.  I had put my dad in charge of it (he is a creative genius), and he presented me and my pirate-costumed friends with incredibly cryptic maps.

They had codes to break, riddles to solve, places to dig, words to look up (we carried a dictionary around), and it was very hard but very fun, and very cold, since it was outside in the middle of December.

The two teams we were divided up in matched wits and speed, the final treasure chest (yes, it was actually a little cardboard-sort of chest buried in the side of a pile of dirt!) was filled with the traditional chocolate coins, ring pops, necklaces, and Hersey's Nuggets.

Then we watched the orientation video ("Muppet Treasure Island," I love that movie!), and then settled down to our dinner.  I had put Dad in charge of this one, too, since I didn't know what pirates ate.  Well, it was very unique.

The table was covered in brown butcher paper, with plates and the utensils, which were knives and shishkabob sticks.  We were served apple slices, other tropical fruits, baked beans, and, the final culmination, Dad pulled two live lobsters out of a supermarket bag.

My friends LOVED this: they grabbed them and named them and had a lobster theater with the lobsters and my toy Sebastian from the Little Mermaid.  One by one, the lobsters were dropped into the pot of water and cooked, served a few minutes later.

Most of my friends had never tried lobster, so it was a very interesting experience.  I had decorated my cake to be a treasure map, and we bought little plastic pirate figurines, with a ship, five crew members, and a captain.

For decoration, my family put up a palm tree cut out, had little plastic sea life, and shells and starfish all over the kitchen, creating a nice effect.

Everyone was in costume, too, witch added tremendously to the atmosphere.

We had a blast, everyone was happy, and everyone's costumes were great, too.  One of my friends came with a "peg leg," and my dad, dressed as the Captain, had a hook, too.  It was all very fun, and it still makes us giggle almost a year later! 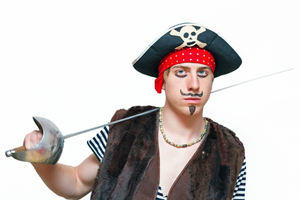