Emerald's Think Green Birthday Party (14 year old) Since my daughter's name is Emerald and we held her birthday party a little early this year (March), we decided to have a Think Green party. Invitations:  I found clip art of the Emerald City from the Wizard of Oz.  I made postcards with the clip art as the background.

The invitation read:  You are invited to attend Emerald's Think Green birthday party on March 12th.  It will be held at the Emerald City from 7 pm to 10 pm.  Make sure you wear green or risk being pinched!  I used Emerald Isle font for the words and did them in varying shades of green.  I then printed them out on cardstock and they were easy to mail and deliver.

Decorations:  We created a huge green sign that we hung on the railing of the porch.  It said The Emerald City and had a picture of the Emerald City on it, like the one on the invitations.  To create a truly green atmosphere inside we used several items.  First of all we used a room that we painted green.  We laid down a large green floor rug.  We brought in green chairs and a sofa with green throw pillows on it.  We put up a lot of plants, so there was a lot of real green in the room too.  I found green light bulbs and replaced the regular lights with the green ones.

At Oriental Trading Company, I found a shimmer green metallic curtain that was the entrance to the room.  I also found green battery operated votive candles that I put in sconces and other candle holders around the room.  The flames on the candles were green as well.  I bought all green table ware including the cover, napkins, plates, forks and cups.  I found green plastic bowls and serving dishes at Wal-Mart to put all the food in.  In addition to the other items from OTC, I found a punch fountain that lit up.  The lights were red and yellow, but I covered the base with green tissue paper and it reflected green.

Costume:  We asked everyone to wear green to the party, so obviously the guest of honor, my daughter, had to be completely decked out.  We found a bright green wig that is styled in a bob style on OTC.  We put it on and styled it with a sparkly green headband.  She wore a shimmering green crown in her hair as well.  We found an outfit at Wal-Mart that has a t-shirt and pants with Kermit the Frog on it.  It has the quote on it, It's not easy being green.  We painted her nails bright green and even applied green lipstick and eye make-up.  She loved being completely green, and the guests loved it too!  It made a great way to greet guests for the party and get them in the mood right away.

Favors:  We gave the favors out at the beginning of the party as the guests arrived, so that the guests who didn't wear green would be covered.  Again at OTC I found green plastic favor bags.  I filled them with green metallic bead necklaces, green shamrock rubber bracelets, green glow bracelets, green lollipops, a green rubber dice game set, and green pencils with green erasers that I had personalized with Emerald's Think Green Party.  I also put in a copy of the CD that we used for the music for the party.  I burned them on green CD's and put it in a green case.  They were able to put on the beads and bracelets and be covered in green so they wouldn't be pinched!

Food:  All of the food was green.  I found green fortune cookies on OTC.  I also bought green M&M's, spearmint jelly candies, pistachio nuts, more green lollipops, and peppermint patties that were wrapped in green.  I cut up green apples and made a dip for them.  The recipe for the dip is:  one 8 oz. package cream cheese (softened), one cup white sugar, one teaspoon vanilla, and green food coloring.  Mix all the ingredients together until well blended and a rich green color.  I found dark blue tortilla chips, that in the green light looked dark green.  I served them with a guacamole dip.  I also made green deviled eggs by adding a little blue food coloring to the yolk mixture.  Instead of a birthday cake, we had a birthday cookie.  It was frosted with bright green frosting and sprinkles.  We used sparkling green candles for her to blow out.  Finally we served a green punch in the lit up fountain.  I used two lime Kool-Aide packets and two frozen limeade juices with a non-alcoholic apple martini mix and a little sugar and water to make the punch that went into the fountain.

Games:  Since this was a party for teenagers, the games had to be old enough to be cool but still a lot of fun.  We did four different games.

The first game was a Green Character Mixer.  We came up with 18 different green characters and wrote their name in green marker on small pieces of paper.  A different one was put on the back of each guest as they arrived.  They had to ask different people questions about who they were until they figured it out.  Here is the list of characters:  Shrek, Oscar the Grouch, Baby Bop from Barney, The Green Lantern, Green Goblin, Prince Navean from the Princess and the Frog, Kermit the Frog, Dipsy from Teletubbies, Elphaba from Wicked, Larry the Cucumber from Veggie Tales, Frankenstein, Skids from Transformers, Yoda, Jolly Green Giant, the Grinch, Mutant Ninja Turtle, Mr. Green from the Clue game, Mantis from Kung Fu Panda, and Jiminy Cricket from Pinocchio.

The third game was a Green Dice Game that we bought on OTC.  There were two dice, one with an action, the other pointed to who did it.  We had to modify it a little bit, since the guests didn't want to kiss each other and there were no drinks.  The guests were creative about what they did that related to the action, like blowing a kiss, or giving a treat instead of a drink.

The fourth game was a Skit Game.  I found four quotes that had to do with being green.  We also went to the dollar store and found all kinds of green props.  We had hats, flowers, mirrors, kitchen utensils, plastic fruits and vegetables, etc.  The guests were divided into four groups and each picked their quote.  They took turns picking props out of the box until all the props were divided equally.  We gave them five minutes to come up with a skit that they had to use the quote in.  Here are the quotes:  It's not easy being green.I do not like green eggs and ham.  I do not like them Sam I am.  When you're green, you're growing.  When you're ripe, you rot. There's Emerald City!  Oh, we're almost there at last!  At last!  It's beautiful, isn't it?  Just like I knew it would be!  Once they were done preparing their skits they performed them in front of each other while we recorded them on video.  When they were done, they wanted to watch themselves, so we played the recorded skits on the TV.

Thank You Cards:  We took a picture of my daughter covered in green silly string with each of her friend individually.  We made that into a thank you card and that is what she sent to each of her guests. The party was a HUGE success.  It is sometimes hard to plan parties for teenagers, especially a mixed group of boys and girls.  It was nice to hear that the guests had a blast and talked about it for days!  My daughter loved it too, which was the biggest success of the night! 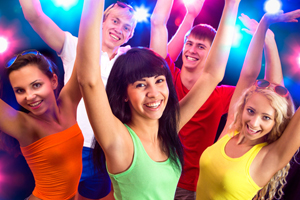