For my 13th Birthday party I really wanted to have a party that my friends and I would remember for a long time, and something original. I decided to have a Hotel Party. My mom went to the local Holiday Inn, which is a pretty nice hotel but not expensive. Anyway, she asked if they could give her a special deal on two rooms and they agreeded. I sent out invitations to my 4 best friends (at a hotel to many girls would be chaotic so I kept it to just my usual group of best girls; this also keeps the drama and catfights down a little). I told my friends that we would be picking them up at 3 on a Saturday, but I didn’t tell them what we were doing because I thought a little surprise would be fun. They had no Idea what we would be doing! The invitations asked to bring sleepover things, a sleeping bag and a swim suit and towel.Check in time at the hotel is 3 but my mom got special permission to go in early so she could decorate the room.

DECORATIONS: We got 20 hellium ballons in a bunch of my favorite colors to hang from the ceiling. We also got I think about 5 pink balloons to put in the bathroom which would be set up as a mini spa. We put up streamers in the room and had glittery confetti, those little firework poppers and a couple of things of blowing bubbles out on the tables. We filled a vase with pixie sticks and another hung up white christmas lights. I Brought my stereo which we had playing out favorite songs. Also a big stck of wrapped presents which we would use later added to the atmosphere. We also hung a pinata and a beaded curtain over the entry way. On the beds my mom had scattered out hershey hugs and kisses. We had a food counter set up on the TV table. In the Bathroom we had put out tons of my hair products and makeup out on the counter. We also had a basket with spa goodie bags to give out to the guests (see the prizes and favors section). We also had bought an inexpensive parafin wax hand thingy (not quite sure what the name is). We had two separate rooms: my mom and dad slept in one and we partied in the other!

ACTIVITIES: I am just going to give you a run through of what we did through the whole party. When we first got to the Hotel we went up to the room and just hung out for a little while, ate, checked out the room, danced and listened to music. Then we played a bunch of games, some that I found one this site. For each game we rewarded winners with play money which would be used later on. We played freeze dance (an old favorite but my friends had tons of fun with this), a game called truth or lie where every one comes up with to truth facts and one lie about themselves. You say your three facts and everyone guesses which is the lie. Whoever guesses the lie gets money. If no one guesses the lie, the person who said herfacts gets the money. We also played Human Slot machine a game where 3 of the girls got runts candy (and orange, banana and grape each). Another person was the "crank" for the slot machine and the final person pushed down the crank. The three people with runts secretly selected one "fruit", put it in their mouth and stuck their tongue out after the crank was pushed down. If two matched the player got a certain amount of money, and got more if three matched. We took turns being the crank, the slot machine and the players. Lastly we played a simple game that turned out to be CRAZY. It was like a version of musical chairs, but simpler because we only had 5 people and because we had limited space. Using the two twin beds we played music and jumped from one bed, to the other and then to the floor in between, then back onto the first bed. When the music stops if anyone is on the floor is out! The last person standing got the money. My friends wanted to play this so many times!!

We also did the pinata during this time. In the hotel room a pinata can be tricky. What we ended up doing was to hang the pinata from a thick wooden dowel. My mom and dad stood on each bed holding one end of the dowel. We did not wear blindfolds for the pinata because we could damage the hotel room. Next we went down to the pool area at the hotel. We spent at least 2 hours enjoying the pool, hot tub and sauna. In the pool we played games like marco polo, chicken and had relay races. After that we took showers and changed then went downstairs to dinner. When we came back we did this really fun game. I LOVE the show project runway where they design clothes, so this game was sort of inspired by that show. My mom and I went to the fabric store and bought lots of fun fabric like pleather, satiny silk, leapord print just tons of pretty stuff as well as trims, lace and ribbon. We wanted to have a fashion design challenge but no sewing so we gave everybody a hot glue gun, double sided tape, regular tape and a stapler. We assigned everyone another person to design for and they had a half an hour (you give more or less time depending on how challenging you want it to be). After that we had everyone do face masks, manicures, makeup and hair to get ready for the FASHION SHOW. We got a digital camera and camcorder and have everyone model their new outfits. We took tons of pictures and video tape (we actually taped the rest of the party to). We had a judge pick winning outfits in catagories like sexiest, prettiest, most professional looking, sillyest etc. and awared money.

Then we went to DINNER (some people chose to wear their creations, others didn’t but it was funny for those who did! Lol). We we got back we goofed of some more. Next we had an auction where we could spend that hard earned money!!! I had picked out a variety of gifts (some good, some "duds) and wrapped them (some were wrapped decievingly like something small in a big box etc.) We had an auction for the presents, with people bidding on each WRAPPED present. At the end we all opened them, and I opened my presents at this time as well. After that we had cake and ice cream. At this point my parents went to bed and we just kept goofing off and entertaining ourselves. We played truth or dare, roamed around the hotel a little bit until it was too late and danced. Around 11 we had to start being quiet so we watched scary movies. The next morning my mom woke us up at 9:30 so we would have time to eat breakfast. Check out time was 11, and we had parents come to pick up.

FOOD: my friends and I LOVE food so I knew I Would have to have LOTS on hand. Though out the party we had out a snack table with chips, cheetos, chex mix and fruits and veggies to make mom happy. They got plenty of candy that we had out in the room (hershey kisses and hugs an pixie sticks) plus candy from the pinata. We served virgin margaritas in funky plastic margarita glasses and we gave everyone 5 dollars for the vending machine. We ate dinner at the hotel restraunt. We also had sparking grape juice and cider. For cake I had a chocolate chocolate sheet cake that we had one of those sugar paper pictures of me and all my friends put on top. We served a couple of different kinds of Ben and Jerrys icecream. Later we ate popcorn and made hot chocolate in the coffee machine (hot water+hot chocolate mix and then add marshmallows and whip cream). The next morning the hotel had this REALLY good breakfast.

FAVORS AND PRIZES: The girls got Spa goodie bags, prizes from the auction and candy. For the spa goodie bags they got a pack of tic tacs, a thing of nail polish, mini shampoo, conditioner, face wash and lotion, fuzzy socks, a face mask, a foot mask or hand mask (I found little packets at target) and a bar of chocolate. The prizes from the auction ranged from giftcards, fake diamond rings, hats, stuffed animals, gigantic bouncy balls, art supplies, cheap watches, lipgloss, cute underwear, CDS, DVDS, boxed cookie mix etc.: really anything cute, girly, inexpenisive you can find plus a couple of "dud" items that could be socks, a barbie, or something like a workout DVD. We also gave everyone glow bracelets and necklaces.  This was SUCH a fun party. The costs can really add up, so watch it! But its totally worth it for such a fun, fun, fun party!!!! 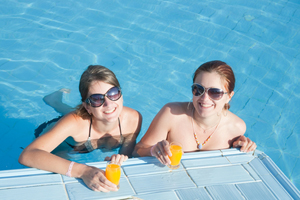