I originally planned the Girls' Night In party for my party, but it ended up being used for my younger sister's thirteenth birthday. It takes very little planning and costs almost nothing, and everyone has a great time.

INVITATIONS: To start with, I created invitation on the computer using graphics I found on the internet. The outside flap showed pink and green bubbles and 3 dancing girls in silhouette. The inside contained the general who/what/when/where/why information, and in addition each invitee was told to bring sleepover supplies.

ASSEMBLY: To start with, you need to assemble a large pile of dress-up outfits, preferably ones with sequins or other fancy decoration. In the pile should be dresses, pants, tops, shoes, and purses to put the 'money' in. In another area, you need to gather hair supplies such as bows, ribbons, curling/straightning irons, ect, and various gaudy jewelry. In a third area,

I recommend a large bathroom, assemble little bags full of assorted makeup. The bags of makeup will also suffice as party favors, so don’t contribute anything previously used. Lastly, you need to come up with a 'menu' for the girls if you are planning to have them stay for a meal.

ARRIVAL: As each guest walked throught the door, they were given $50 in play money. Once everyone had arrived, each girl was led into 'Bloomingdale's' (Where we had laid out dress-up outfits). On each outfit was a tag with a price on it, the prices varying per outfit. Everyone selected their 'evening wear', and used part of their $50 to pay the 'cashier' (Me).

After each girl had finished getting dressed, they were all led into the 'salon', where they paid for hair decoration and jewelry, and then paid for the 'stylists' (A few of my friends) to do their hair. After that was done, they were taken into the 'beauty parlor' to get their makeup done. They each seleced a bag full of various glamours makeup and paid for it. These they got to keep.

Once each girl was ready they were taken into the 'Diner' where they were seated and given menus. Using the last of their play money, they ordered their appetizers (small salads, fruit bowls), entrees (tacos, pizza) and desserts (cake and ice cream).

After dinner, all the girls were ushered into the 'Theatre' for a couple girly movies like Clueless, Mean Girls, and the Princess Diaries. When each girl left the next day they were given a polaroid of themselves all dressed up. 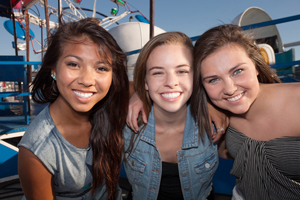