For my thirteenth birthday I struggled to find a theme that would work for all of my friends. I wanted something more than the regular pizza-and-movie considering I was turning 13, but I didn't want my parents to spend a fortune. So I came up with this!

INVITES!: For the invitations I bought some at Wal-Mart and wrote down the details, telling them to bring a change of clothes and to wear something they wouldn't mind getting dirty. I didn't tell them WHY though I wanted the theme to be a surprise. I sent out the invites about 3 weeks ahead of time and I invited 21 girls, but ended up with 17.

DECORATIONS!: Since most of the party was outside, I didn't do a whole lot. I picked colors (lime green and turquoise) and that was my secondary theme. I bought a turquoise table cloth, lime-green plates and napkins, turquoise silverware and cups. Then I bought streamers in both of those colors and put them around the house. We only spent about half an hour inside and most of the streamers just got accidently torn down so it wasn't a big deal.

ACTIVITIES~~The guests arrived at about 1:00 on Saturday. The first thing we did was explain to them what was going on, and then we paired off into two teams of 9. Each team got a name and a color bandana (green and red) and then we started the SCAVENGER HUNT. Each team got a list of about 100 things to get. They had an hour to go around our neighborhood, knocking on doors and asking people if they could have anything on the list. There were some simple stuff on the list (e.g paper clips, an eraser, an empty can) and then there were some harder stuff (a sock with two and only two holes in it, some green eyeliner, a Pizza Hut pizza box).

The rules were:
1. You can only get one thing from a house, and no buying anything.
2. Do NOT split up from your team (they did this anyway, though!)
3. Don't go inside any house, or get in any cars, etc.

The purple team had my Mom with them and the green team had my Dad riding around on his motorcycle behind them. We live in an extremely small, safe neighborhood so there were no problems. After the hour was up, everyone headed back to our house on foot. Once we got there it was time for CHALLENGE TWO (after a quick drink break!). The Frozen Feet game. Each team got in lines of two, and each line had a tub in front of it. The tub was filled with ICE COLD WATER and marbles, and on the count of three, the team members sat down in a chair and stuck their feet into the tub. They had get as many marbles out with their feet in one try as they could, then put them in a bowl next to the tub, and go to the end of the line. After two minutes was up, the marbles were counted and the team with the most marbles got 10 point, while the losing team got 5.

The score was kept on a big dryerase board so everyone could see how their team was doing.

Next we did the TIMED BLINDFOLD RACE. Each team chose one person to do this one. That person was blindfolded, and then on the count of three they had to complete all the tasks, while their teammembers vocally guided them through the course. Here was what they had to do: Go to the sandbox, grab the mini shovel, and dig under the X until they found the baseball. Grab the ball, put it in the wheelbarrow, and wheel it over to the miniature playset, where they climbed up the ladder and slid down the slide. Next they did the limbo under the limbo stick, spun around 10 times and then did a cartwheel. Then the next team did it. The team with the lowest time got 10 points, and the losing team got 5 points.

Next it was the SOAPY WATER BALLOON GAME. There were two chairs, two tubs of 50 water balloons covered with soap, 18 pairs of soapy latex gloves, and two plastic rain ponchos. Each team chose one person to sit in the chair and wear the poncho, and everyone else put on the soap gloves and got ready. On the count of three, everyone on the team grabbed the water balloons and tried to pop them over the seated person's head. 10 points for each water balloon popped, 5 points off for each one dropped. This was really hard! There was a 60 second limit, and most of the balloons were dropped, so we made it: 10 points popped, 5 points off for dropped AND popped on the ground.

After everyone was done, we played the favorite game of the night:  MARSHMELLOW WHIPPED CREAM CHEW! This was definetely the best Kodak moment of the day. Every person on the team took a turn to do this, but we did it one person from each team at a time. What we did was: we had a table set up, and two chairs. The first person from each team got on some goofy looking science-lab goggles, a plastic rain poncho, and sat down. The marshmellow was placed in the middle of a soft paper plate, and then we sprayed cool-whip (the stuff from the can) over it. On the count of three, the girls had to stick their face into the plate and try to get to the marshmellow. The first person to eat the marshmellow won. Each girl got a chance to go, and then the points were added all together.

All the points were added together while we went inside and opened presents. Then the winning team was announced. The winners got to pick from one set of favors and the losing team got to pick from another (the losing team's prizes weren't quite as great as the winning team). Then everyone got to pick a King Size candybar. After that my Dad set up a bonfire in my backyard and everyone had hotdogs, chips, soda, etc and there were cupcakes if anyone wanted some. We had each cupcake have one letter on them so when they were put all togheter they said HAPPY BIRTHDAY JALEE! (which is my nickname) Then we all decided to jump in our pool! We swam for about 30 minutes why the parents talked, and then everyone went home. 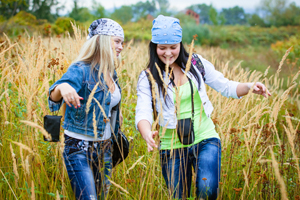