Shannon in Warren, Michigan, US.

This is a COED Teen (14-15yr olds) Birthday Party Idea for the Summer.   I was looking for Party ideas and I didn't want a 'theme' or anything.  That's not what teenagers want, especially not at COED Parties.  My other friends had watched movie's in their basement which turned out to be basically boring.  After hearing my friend Mike, had had a surprise birthday party where a scavenger hunt was placed and it was a blast, I asked a few of my friends what they thought.  Here's the ideas of what I want to do:

I live across the street from a Middle School which has a "Nature Center" (Basically a wooded area) behind it.  I plan on walking over there and basing the majority of the party in there.   (This can be done anywhere but must be in a large area.  Not your front yard.) - Remember to wear clothes appropriate for the day and if outside for a long time, wear sun screen and if in the woods wear bug spray.

I want to hold a 'Capture the Flag' game which actually works out well since people have made forts and such back there, where they play paintball now. Plan on having a good ammount of people so you have enough for teams.  Anything below ten people is too little.

How to Play:   You need two "Flags" (or items to represent them.)   Find a dividing line.  Split the people up into teams.  One team gets Side A and the other teams gets Side B.  Each team must find an area for Jail. Basically, you have some guards for jail, and you have some seekers.  The seekers go across the dividing line and try to search for the opposing teams flag.

On the other side, Someone catche's Katie and sends her to Jail.  Mary runs back to Team A's side so she doesn't get caught.  Same goes for Team B's players.  The only way to get Katie out of jail, is by sending someone on Team A's side, (Such as Mary) to go tag Katie and run back to Team A's Side.  Whichever team gets the opposite team's flag first, wins.

I also plan on Maybe playing "Hide and go Seek", Seeing as there is a large enough area.  (This is an option depending on time.)

For the Main Part, I plan on playing a Scavenger Hunt.   This will be done by once again splitting people into teams.  They will be given a certain ammount of time (Such as 3 hours) to find all of the items on the list.  (I live in a good location for this as well.  Such as near those woods, A community Center, And a few blocks-walking distance- away from a large fast food area.)   Things on the list may include:
- One small fry from McDonalds
- A picture next to the Big Boy boy
- A Helicopter Seed
- A Picture of someone sitting in a tree
- A Straw
- Ten Blades of Grass
- Pink Eyeliner
- Three Rings
- Pair of Sunglasses
- Picture of someone in opposite sex's clothes   etc. etc.

Whichever team returns first wins.  Unless another team has more (correct) items.  You may also want to give the teams money to buy the bought items, or not.  It's up to you.  Rules vary on place and people, but basically teams should be able to use any (legal) transportation available.

After the Scavenger hunt and other games, We will all meet back at the forest and have a Picnic.

Food may be brought after the games.  Food May include, Chips, Sandwhiches (Or sandwhich toppings so people can make their own), Pop, Vegetables, etc.  Cake and Icecream can also be brought.    I was looking for things to do with both sexes, and not a theme such as "American Idol", or "Hawaii".

My other friends enjoyed it, and if you put more outragious and embarrassing things on the scavenger hunt list (Such as a live goldfish was on my friends,) it's even more fun.

You can add other games to make it longer, or do whatever you want.  But it should be a fun, enjoyable party.  Enjoy! 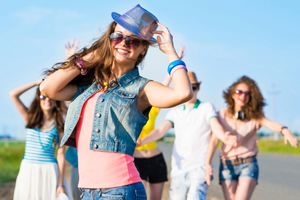