LaChrisa in The Colony, Texas, USA

Mardi Gras Spicy 16th Birthday Party!  I just completed a party for a co-worker's daughter who turned the big 1-6 over the weekend.  Since Mardi Gras is this month it was obvious choice for the theme and since Mardi Gras is synonymous with SPICY, it was aptly named Spicy Sixteen, instead of Sweet Sixteen.

Also, the teen is a very spicy girl and has lots of flair.  So on to the party details! The invitations were store bought plastic masquerade mask in black, silver, gold, white, red, green, and yellow.  The birthday girl passed these out at school with the details of the party.   It was held at the mother's apartment clubhouse, which had a loft that over looked the fitness center, entryway, and living room.  There was railing throughout that resempled the New Orleans balconies on Bourbon Street.

So starting there, I alternated, purple, gold/yellow, and green streamers, cut into strips, between the spindles in each opening and the entire stairway.  I blew up about 50+ balloons in the same colors as the streamers and tied ribbon in the opposite color to hang them in the openings and from the ceiling.  I took some of the beads, in purple, yellow, and green that had plastic clasps and hung them in between the balloons, like a beaded curtain, in the opening that overlooked the fitness center to hide it more.  I clustered some of the balloons in three's, purple/yellow/green to disguise the ceiling fan and track lighting.  I hung these same clusters directly over the 2 tables/stools they had there for seating.

In addition two of the clusters hung over the food that was set up in the kitchen on the pass bar downstairs.  She was on a very strict budget, but some more ideas is to take the streamers, cut into strips, along with beads and hang those from the ceiling too.  Also, to save some money, instead of buying pre-made masks from the store, her daughter, who is a great artist, drew some masks on cardboard boxes, she cut them out, and I used for stencils.  I also purchased a simple small foam mask to use.

The masks she drew were great; one was a Jester that turned out great once decorated.  I had 3 different size and shapes of masks, not including the Jester mask, so we could have variety through out the room.  Now for the mask decorating, I purchased tissue paper and foil wrapping paper in purple, gold/yellow, and green to glue to the cardboard for the background color.  I also had gold spray paint on hand to use.  I had foil confetti in different shapes and sizes that I purchased quite some time ago.  I primarily used the circle shape in purple, gold, green, blue, red, black, and silver.  I did use a star shape, a curly q shape, and fleur de lis shape as well.

I made about 15 to 20 masks and hung them on the walls in the party space, along with cardboard foil stars of different sizes, beads, and green feather floral picks.  I took one corner of the room, that was recessed and out of the way to place the cake table.  Above the table I purchased the large create a banner letters from the party store to spell out  SPICY 16TH CAMBRIELLE with the mask and stars surrounding it.  I used a purple plastic table covering over the table and then wrapped a foil garland around it that said Happy Birthday I tossed some of the beads and confetti on top of the table to give it more color.  I purchased yellow Styrofoam cake plates, placed a stack of green napkins on top of them and wrapped them with a big purple bow.  This was placed in one corner at the back of the table.  I individually wrapped a purple fork and spoon in a green napkin and tied them with purple ribbon.

Then took a gold plastic mask a wrapped it around a bundle of them and placed them next to the cake and napkin display.  I also purchased a floral purple happy birthday balloon, stuck it in floral foam, wrapped the green and yellow tissue around the foam, placed it in a short glass vase, and tied purple ribbon around it.  I placed this on the on the opposite corner of the plates and napkins.  The cake was a half sheet purchased from Walmart that had purple, green, and yellow piping along with beads on the edge, little mask picks, and coins.  There was another table set up in similar decorations with more beads and coins (purple/gold/green of course) in front of the stairway railing due to it being very wobbly.  I used a yellow plastic table covering and placed green and purple tissue sheets over the top along with beads, coins, and confetti.

On the 2 table and stool sets I placed green table cover with purple and yellow tissue paper on one.  Then yellow cover with purple and green tissue paper on the other.  I did the same tabletop decorations with coins, beads, and confetti.  I added a hurricane lamp glass with gold shred, which was also thrown on the other tabletops, and wrapped with purple and green ribbon for height.  I also placed a plastic mask around the back of the chair with some beads.  I did the same tabletop decorations on the pass bar down in the kitchen.  I took the left over plastic masks; same one used for the invites, and place them on the tabletops, pass bar and the balloons hanging in the openings.

I suggested to my co-worker to have the birthday girl throw the beads from the opening that looks down into the entryway to her guests. Along with the beads for party favors, I made small foam masks for the guest to take home.  I took the small foam mask I purchased at a party store and used it as a stencil to make my own foam masks.  I bought 3 sheets of each Mardi gras colors, traced 4 masks out of each sheet, and cut them out to decorate.  I used the same confetti on these mask as on the cardboard ones used on the walls in the party room.  I purchased elastic cord from Wal-Mart.  These were placed on an entryway table that was decorated with tissue paper, confetti, and gold shred.  I placed green/purple/yellow tissue paper on the pass bar with confetti and gold shred on top of it.

I suggested several food ides for the party; Popeye's Cajun chicken, dirty rice, red beans and rice, gumbo, jambalaya, etoufee, and spicy sausage.  I found a mock Hurricane drink called Tropical Storm for her to make for the underage quests.  She also served Hurricanes to the adult guests.  I also suggested to place thawed frozen crawfish tails in cheese dip(queso) with rotel tomatoes to give a classic party dip and Cajun flair.  She did have wings, chips and salsa, and a veggie tray for the kids to graze on the extra table, next to the railing, upstairs in the party room.

Since teens are at the age that doing crafts and games at a party is not cool, they just had have music for the kids to dance to and keep them busy.  I heard the next day the kids were really impressed the party décor.  They do not go to many parties where the party room is completely transformed for a theme.  The birthday girl had a great time, even though the mother was stressed out from all the teenagers that showed.  She is planning her 18th party now.  I hope everyone enjoys this party submission and get many ideas from it.  Just remember when doing a Mardi Gras party, more is better! 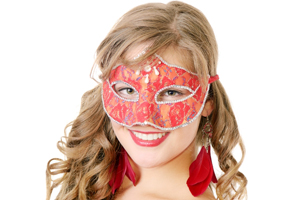