For my 13th B-day I wanted to do something mature, yet very fun and creative, something girls will enjoy since my party was all girls. I invited 9 of my closes friends 4 of us were cheerleaders so I told them to bring there uniform since there was a game that night. Every girl came over at 5:00pm on a Friday wearing normal clothes, and they had there pillows and blankets! the cheerleaders got there uniforms on, make up, and did there hair, while the non-cheerleaders did there make up and hair.

Than we went downstairs which is like a basement except cozy and colorful. We set it up as a spa room, couches for people waiting, nail polish, filers, face masks, make-up, and I have a built in bar. While some girls were getting there spa treatment, the other girls were relaxing and reading magazines, while my younger sister was taking there drink/food orders.

Here were some of the drinks/foods, which we put on a homemade menu that came with there broucher. (since we wanted the party to be mature we had drinks with alcoholic names..but they WERENT alcohol!)

Starwberry Margaritas: Sprite with food coloring and ice!  Scotch On The Rocks: Ice tea with a lemon!  Vodka Shots: Tonic soda and O.J!

Wine: Grape juice!  Champagne: Sprite with tonice soda and food coloring!  We put the drinks in special cups and the girls felt like they were at a swanky hotel, it was great. Here were some of the foods. BlueBerry Muffins!   Chocolate Chip Cookies!  Brownies!   Vegie/Fruit platter!  And Caviar and Crackers which were actually Smashed olives on Crackers! It felt like we were at an adult spa.

After all pampared and had our make-up done we took tons of pictures with a digital camera, than loaded them onto the computer and made fun of them, it was hilarious and it let us keep our make-up on longer before washing it off!

Than we layed out sleeping bags out, pillows and anything else we needed. And we loved our make-up that we still wanted to keep it on a little bit longer so we got out some bowls, made tons of popcorn poured a lot of soda and than poped in the first movie. While the credits were playing we used twoof my 5 bathrooms 5 girls went into one and 5 into the other.

We washed ourfaces and put on p.j's  We than turned off all the lights and watched bunches of movies. Some girls fell asleep earlier than others so we gave them funny make-overs, and put toilet paper all over them, it was fun!

And than in the morning my mom made us a nice breakfast. Pancakes, eggs, bacon, hashbrowns, with milk it was declicious. Than the girls mothers picked them up. My party was really fun and mature. It also didn’t cost very much and was easy to clean up* 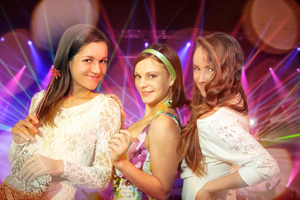