For my 13th Birthday Party we did a Camping Party, but this was no ordinary camping party! This one took place in northeren ontario, in a little cottage property in the middle of the woods (if your going to do this find somewhere that is at least at little bit rustic).

The first game was to guess where we were (this game i sat out for), the winner got to chose her bed first. We all set up our beds in the cottages guest house (the cottage was a friend of our's who let us stay in the guest house by the lake). Then we came back outside for the scavenger hunt. We were split into teams of two. Each team got a list of items to find in the woods area (ex. a black stone, etc.), and the first team with the most items gathered in 30 minutes was the winner. Their prize was chosen from our prize box (a box or bag that contained little prizes like: nail polish, body wash, hair brushes, etc.).

The next game was a swimming search. In the lake my mom hide in our area a pink dollar store purse. With our same teams of two we played the game. The first person had to look (with goggles on) for the person,and once they had found the location, they would swim back and tell their partener were it was; the the partener had to go and swim out to go and get the purse. The team to get the purse wins a prize from the prize box. We played that about 3 times.

Then my mom allowed us to swim so we all swam in the lake for about 2 hours, before we had to come out for supper.

For supper we each ahd to cook and prepare our own food, without the help of an adult. We made the fire (with their supervision ofcourse), and then we cooked our hotdogs, french fries, and our dessert (jiffy pop, and cookie dough (a giant deformed globby cookie) on the fire, we all had a blast doing that! By this time it was around 6 o'clock, and we were very full, so we decided to just sit and talk by the fire. We did that for about 30 minutes before we wanted to go swimming again, so we went swimming for another 2 1/2 hours.

Then we got out and it was around 8:30 and began to watch some movies (with lots of junkfood) in the guest house. We watched 5 movies and that lasted until 5:30 in the morning. We got up at around 9:30 am and we had breakfest (pancakes, toast, and peameal bacon).

Then we went on the boat and went tubing and water skiing for hours, until 3:30 in the afternoon! When we came back we made lunch again on the fire (hamburgers and fries). Then we played another competitive game, this one was called Boat races. We were back in our teams again and each team was given a limited amount of items to a build a boat with. When the boats were built we put them in the water and we began blowing on them to make them sail, and the first team who got their boat to the finish line won a prize from the prize box.

The next game was called: Water Proof. Each person (no teams for this game) was given a tampon without the applicator and the wrapping just the actual tampon, and was given seran wrap. Each person had 3 minutes to, using seran wrap water proof the tampon so it wouldn't enlarge and soak up with water. Then each person had to place it in the shallow part of the lake and see after 10 minutes or so, whose lasted the longest and was the most water proof. The winner got a prize. Because we were still full from our late lunch we didn't have supper until later.

After the game we went back in the water to swim until 8:00 ( only 2 1/2 hours) until we came back out and watched some more movies. In the morning we had breakfest (cereal, milk, pancakes, and back bacon) and then we packed up to leave. We got back at around 2:00 in the afternoon and then we opened my presents and then I handed out the lootbags and then my guests left. 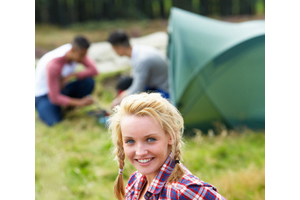