Since my sweet sixteen was such a success, my best friend enlisted me to help me plan hers.

THE EVENT The hardest part was settling on a theme.  She is one of the coolest people ever, mostly because she has such ecclectic tatse.  So obiously, it was hard for her to come up with just one theme for her special day.  So we decided to appease all her wishes in one party.  She wanted a hotel party, a pool/beach party, a spa party, a house party, and a bonfire.  We dicovered Lilac Resort (www.lilacresort.mb.ca) had the facilities to hold all of these.

We rented one of their mini-cottage/motels out.  Check-in was 3 o'clock so we'd have time to go watersliding, sunbathing, chill and watch movies, and do spa treatments and primping on eachother before everyone else came at 7:00.  When the rest of the guests came(about 50 people in total) we snacked, swam, sat around the campfire, and danced until around 10:30 when we had cake and the birthday girl opened her presents.  At 11:30 everyone, but about 10 people(girls and guys) stayed to clean up and watch movies.  The guys went home and the girls slept over.  We woke up late, went swimming, cleaned up and left.

FOOD For the 5 girls who were there all day, my friend supplied salads, pizza, fruit, and veggies for noshig while they swam and kicked back doing spa treatments.  She loves Red Bull, so there was plent on hand to get us amped for the evening.  She brought in cases (about 5) of bottled water for the girls as well for the rest of the party-goers later on.   With tons of hungry tenagers it was going to be a lot to fuel them trhough swimming and dancing.

There were water ballons and silly string, just generally alow-key, high-energy night of fun.  We bought about 7 jumbo bags of chips, snack mix, and pretzles.  She supplied them with plenty of bottled water and soda all night long.  She used brownies for her cake, for easy clean-up and no litter.  The time for the party was ideal, because she avoided a dinner-hour start time.  The costs to feed 50 teenagers would have been huge.  The girls had smoothies and cinnamon buns and fruit for breakfast.

DECORATIONS The resort was beautiful and not much decorations were needed, seeing as she wanted a low-key party.  All that was done was large logs were hauled ina as seating for the bonfire and Christmas lights were placed inside and out of the cabin.  We also needed to bring in a t.v/dvd player and  a stereo.

GUEST LIST/INVITATIONS My friend is wildly popular and was leaving our school, so she wanted her Sweet 16 to be a huge event, memorable for all her friends and aquaintences alike, and it was also like a final send-off for her.  Invitations would be many, so they needed to be inexpensive.  She used black bright pink computer paper to create a flyer-ish invite mimicking the invites to Jennifer Lopez's fasion week show. Her favorite part was the RSVP line: only the fly need reply.  They were slipped in colorful envelopes and handed out at school, discreetly.

We go to an all-girl's school but she has about 10 close guy friends.  She invited them all, but wanted to ensure  reasonable boy/girl ratio so the guys wouldn't feel uncomfortable.  So she let her closest guy friends bring a pre-approved friend.  She also allowed her friends with close boyfirends bring them along.

The park requires everyone to have a visitor's pass and to pay to get in.  What we did, to ensure accuracy was maintained is created a list of everyone who'd RSVP'd and handed it into the front gate.  If someone's name was on the list, they would'nt have to pay. The office kept track of the number of guests and we paid them the next day upon checkout.

SAFETY When you get a group of teens together partying in the summer, it is almost certain some of them will have been drinking.  Which is why we asked the park attendants to ask if they had been drinking or were planning on it and got a Mounty friend of the family to administer breathalizer tests.  We didn't need any trouble on the big night of ourfriend.  Any rowdy people would get us kicked out for sure and we also wanted everyone to have a good time.  It was included on the invite that drinking would not be tollerated.  It may seem extreme, but it took a load off every one and was one less thing to worry about.  Also, in the cabin we locked all the bedroom doors and had parents in each one just so we would know where they were if we needed them and could be included.

EVALUATION After the party had been over for a few weeks people were still raving about "the best party of the summer".  It was an amazing kick off of summer and a great way to let off post-exam stress.  The evening went off with only a few minor hitches and we were only asked to "quiet down" a few times.  There were plenty of pictures taken and many memories made.

She used pictures she had taken with each guest upon arrival as thank you cards.  A sweet sixteen should reflect the person, and my firend is laid-back and cool so it was the perfect party.  I know friends who are super-girly so a huge, formal party was for them.

This party was not that expensive to run: under $400 for sure, half paid for by the birthday girl and half by her parents.  (P.S - she made all $200 back in presents.) 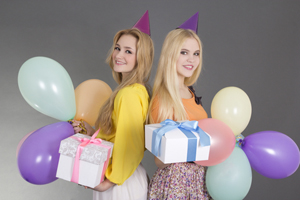