Last year, I had a hollywood/academy awards/oscars party. It was soooo much fun.

For the invitations, nothing fancy. I just made them on the computer using the colors gold and red, and they looked fine. I gave out all the usual info, and I also told everyone to dress up pretty fancy. Setting up was fairly easy too. The supplies you will need are: red fabric, food, statuette awards, and decorations. First I bought a long, long piece of red fabric and put outside on the walkway up to the house. Inside, we bought all sorts of decorations.

We had lights, camera, action posters, and other movie themed stuff. I also had other fun sparkly centerpieces all around the house. The guests(I had 8 friends over)Began to arrive at about 5:00. We just hung out and talked and played games for a little while.

Once everybody got there, it really started! First we all went out and took pictures on the red carpet. I had previously printed out scripts of short scenes from some of my favorite movies: Parent Trap, School of Rock, Harry Potter, and Grease.

Everyone was then divided into groups. Each group got a script. They had a few minutes to practice, and then it was time for the show. My mom and dad pretended to be announcers, and they started it off. Then each group came up and performed. It was hysterical, and tons of fun.

Then we went to have dinner. We had a buffet of spaghetti with different kinds of sauces. We also had salad, meatballs, and bread. It was yummy, and a little fancy, to go along with the whole hollywood theme. After dinner we all went back to where we had been performing the skits. My dad came up with all different categories.

We handed out oscar statuettes. Everybody got one. Then we went and had a giant icecrem bar, with every flavor and topping you could think of. After that we all got into pajamas and piled into our sleeping bags to watch a movie.

We watched Pride and Prejudice with Kira Knightley, just because I love it, but you can watch whatever movie makes you happy. I had a choice of three movies, and we voted to see what we should watch. That's the most fair way to do it, so then everybodies happy.

I don't know what time we FINALLY fell asleep, but it doesn't really matter. In the morning we had Winchells doughnuts and fruit and bacon. Everyone left about 10:00.

For party favors I gave out A little bag of cute stuff: Big plastic rings, cool glasses, silly putty, and cute little stuffed animals. They also got their oscar statuettes and the pictures from the red carpet. The best part of the party was that I said no gifts. Instead, I asked everyone to bring a donation of at least ten dollars. I raised $188, which I donated to Save the Children.

Everyone went home happy, and raved about the party for forever. This party was awesome. If you decide to use this theme, I hope you have as much fun with it as I did. GOOD LUCK! 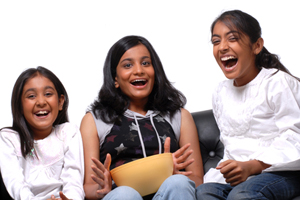