Well, my 13th birthday was last week and I wanted to do something really special. After many hours looking at this site, I finally decided to host a Hawaiian Luau.

I invited 14 of my best friends (asked to come in Hawiian clothes, e.g. Leis, grass skirts, flip flops, sarongs and bikinis) to the party and 5 of them were asked to stay the night afterwards( I suggest that you have a reasonbly small group of friends, quite a few of mine were on holiday, which I am quite glad of now, as our house is quite small).

I hand made my invites, which did take a long time, but I'm sure that you could just print some of of your computer, or even buy some to save time. I came to an agreement with my parents that my friends could stay from 6:00pm to 10:00pm as we were going to cook our own food on a raclette (see below). As it was August I rather stupidly assumed that we would have lovely weather, as I did last year. On the day though, it tipped down, so obviously the party had to be held indoors.

Luckily I had planned what to do if it rained, which I suggest would be a good idea, especially if you are not sure of the weather. I had a few friends come to my house before hand to help decorate the party room. We laid beach towels on the floor, pinned up Hawaiian posters, put (unlit) Tiki torches around the room, a wind break in front of the window, we put silk flowers around the room and got a indoor palm tree.

At the front door, we put up a sign saying 'ALOHA' and just outside the door, my Dad put some Tiki torches and set them alight, so it was nice for when the party guests arrived. At 6, all my friends started to arrive. As they came in the door, I handed them each a rainbow bracelet, a lei and a silk flower headband as party favours. We danced and talked in the living room. My mum had managed to get hold of the soundtrack from the Elvis Presley film 'Blue Hawaii'. We also played the beach boys.

At about 7, everyone sat down for dinner, and as I mentioned before, we were using a raclette ( we had to get 2 because of the number of people coming). A raclette is like a little grill or barbecue, which you have to cook your own food on. My mum bought ours at a local department store, but you could maybe find them at an online store. The raclette was great fun, and we held contests to who could come up with the weirdest combinations of food.

After we had all eaten, my mum and dad cleared up whilst my friends and I held a hula dancing competition in the living room, we also got hold of a bamboo pole and played limbo. By about 9, we all sat down again fo pudding, where we made pancakes on the raclette. We also grilled pineapple and choclate and marshmallows and things.

We then got changed for bed and spent the night camping out in the garden in our tent. The next morning, we were all quite tired, so we watched Lilo and Stitch whilst everyone got picked up. I really enjoyed my party , and am thinking about a Murder Mystery to top this party next year. 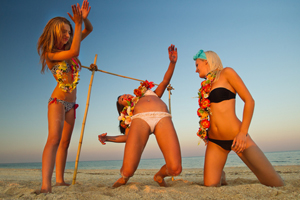