AMERICAN IDOL PARTY 13 YEARS OLD: I love American Idol, so what better way for me to celebrate my 13th birthday than to have an American Idol party?

INVITATIONS: I got blue and white vellum paper and layered the white on the blue.  I only had one square of each, though.  I printed out the information on the computer in gold font.  The information read.....WELCOME TO HOLLYWOOD!  NAME WOULD LIKE TO INVITE YOU TO COME AUDITION FOR AMERICAN IDOL IN HONOR OF HER BIRTHDAY!  AUDITIONS WILL BE HELD AT ADDRESS ON DATE AT TIME UNTIL DATE AT TIME.  TO RSVP, CALL PHONE NUMBER BY DATE.  WHEN YOU CALL, PLEASE TELL US THE SONG YOU WILL BE SINGING.  YOU CANNOT CHANGE THAT SONG ONCE YOU TELL US.  IF YOU WOULD NOT LIKE TO SING, YOU CAN BE A JUDGE......Then, we glued the piece of paper with the information to the middle of the white vellum, and decorated the paper with silver and gold stars.  When the guests RSVPed and told us if they were going to sing or judge, we burned (bought the songs, not illegally :)) the songs that the kids were going to sing.

DECORATIONS:  We set up an area downstairs to be the stage.  We hung up old white curtains painted with the American Idol logo and hung them up around the stage.  Then, we set up a long table in front of the stage with the same amount of chairs as there was judges.  That table was the judges table and was going to be transformed into the dinner/dessert/breakfast table.  We hung up blue and white balloons, had a blue tablecloth, and white tableware.  FOOD:  We had pizza for dinner.  Chocolate cake with a giant frosting microphone.  We used blue food coloring in vanilla frosting for the handle of the microphone and vanilla frosting for the speaker part of the microphone.  We had donuts for breakfast.  We set out a snack table with soda, chips, cookies, etc.

THE PARTY:  I had 5 girls, including me, so my Mom didn't have to 'hire' anybody to help with the stations.  I had 2 girls be judges.  The judges went to the stations first (even though they weren't singing), while I had a CD player with the songs the girls would sing on it near the stage.  The 3 girls singing helped each other with dance moves, while the judges were at the stations.  There were 3 stations.

The first station was the HAIR station.  We had pictures of different hairstyles my Mom could do and each girl picked out which one they wanted to have.  We did the girls hair one at a time.

Next was the MAKE-UP station.  Each girl got to pick eyesadow, blush, and lipstick.

Finally, was the ACCESSORY station.  Each girl got to pick out 2 things from a big trunk of hats, boas, and costume jewelry to wear.

Then, the singers came in.  The judges and my Mom each take a girl and they each did their hair, make-up, and showed them the accessories.  We lead the girls into the stage area and were given BACKSTAGE PASSES to go to the afterparty.  They were decorated with the American Idol logo and a long contestant number, such as 52661.  The passes were a pieces of paper with a hole at the top, and a piece of yarn was thread through the top.  Then, the singers decided who would go first, and the judges decided who they would be: Paula, Simon, or Randy.

Each person had to make comments about the singer BASED on the JUDGES, not the singer's ability to sing.  For example, if the singer did good, but not great, Paula would say "That's good, that was good.  You might want to work on blah blah blah.  But I think you should move on", Simon would say "Dreadful, absolutely dreadful", and Randy would say "Dog, that was cool, that was cool.  I gotta give you props for that.  You're moving on".  Then, the auditions began.  It was really cool to watch everyone sing and hear the imitations of the judges.  One girl even surprised us by singing badly-on purpose!  After that, we awarded medals to the singers and a money reward (chocolate coins) to the judges.  Then, we had pizza.

After that, we surprised the guests by having TALENT IDOL, a game we made up.  It was like American Idol, but you could dance, juggle, tell jokes, etc.  This time, only one person wanted to be a judge.  We gave out CDs for people who wanted to make up a dance routine or sing again.  People could work by themselves or in groups.  Then, we watched everybody dance, sing, act, recite, etc. and Simon was the judge for everyone.  We gave out candy bars to everyone at the end of the auditions.  Then, we had cake and opened presents.

Next, we played PIN THE MICROPHONE ON FANTASTIA BARRINO, American Idol's newest winner.  We had a picture of Fantastia singing, and we had to pin the microphone in her hand.  The person to win got a blow up microphone.  After that, we played AMERICAN IDOL SCRAMBLE.  I gave each person a paper that had American Idol themed things on it, scrambled up.  For example, Simon Cowell was Nimos Lewlco and Singer was Rigsen.  Whoever got them all unscrambled first got a blue necklace.  After that, we put on music and danced around, played bored games, and just lounged around.  Then, we got settled into our sleeping bags and watched MEAN GIRLS, even though it wasn't themed, we all loved that movie.  In the morning, we ate breakfast and gave out goody bags.

GOODY BAGS:  There was a CD of songs sung by American Idol winners and a $5 gift certificate to the closest CD store.  Not to mention a whole bunch of candy.  For thank you notes, we sent them each a tape of the singing auditions.  Everyone said they were surprised to find out that it was being taped!  THIS PARTY WAS REALLY AWESOME.  ALL OF MY FRIENDS LOVED IT AND I BET YOUR FRIENDS WILL, TOO.  I HOPE MY IDEAS HELPED YOU.  HAPPY BIRTHDAY! 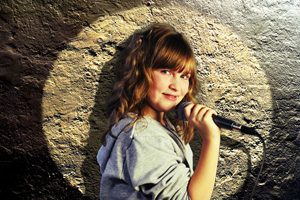