Sarah in Parksville, BC, Canada

My thirteenth birthday party had an Alice in Wonderland theme.  I'm a huge fan of both the books and the movies, and I thought it would make a really good party!

INVITATIONS: For invitations, I bought a pack of jumbo playing cards at the dollar store and pasted a sheet of printed party information on the back.  Another idea I had was to make little top hats out of black cardstock, attach pink ribbon, and add a tag with the party information.

COSTUMES: I told the guests that they could dress up as Alice in Wonderland characters if they wanted.  As for me, I made myself an old-fashioned, Alice-style blue dress and added black and white striped tights, a plastic tiara and lots of colorful plastic jewelry for a quirky look.  AT THE PARTY (DECORATIONS, ACTIVITES AND FOOD): The idea was that the guests would go through the different parts of Wonderland (not in the order of the story, though).  There would be an activity at each part of Wonderland.   I painted the white rabbit (pointing at his watch) onto cardboard and stood him up at the front door.

When all of the guests arrived, they were led through the house and then out through the back door into Wonderland!  When the guests first emerged from the door, they were in the garden.  My inspiration for this part of the decorations was the Tim Burton movie.  I made lots of giant toadstools.  I cut pieces of cardboard concrete form (different diameters and different heights) for the stems and painted them in mushroom brown.

For the tops, I used thick wire (coat hangers might work) and started by shaping the pieces into circles.  I made arches and attached them to the circle.  I dyed circles of white fabric in different bright colors and draped these over the tops.   A blue plush caterpillar was placed on top of one to represent Absolem.  I also bought lots of oversized silk roses (about 3 tall stems) in various bright colors and stuck them in the ground with garden stakes.  The activities here were a caucus race and pin the grin on the Cheshire Cat.  For the caucus race, I marked out a course in a circle with rocks and everyone simply ran around until my mom yelled stop and the last person to sit down in the center was out.  We kept going until there was a winner, and the prize was a little toadstool lamp that I found at the dollar store.

For pin the grin on the Cheshire cat, I painted the Cheshire cat onto a large piece of cardboard (leaving the grin blank) and tacked it up on a tree trunk.  All of the guests were given grins with double sided tape on the back.  The game was played like pin-the-tale-on-the-donkey. The prize for the winner was a little set of Alice in Wonderland nail polishes that I bought on sale.

The next area was the Red Queen's court, AKA my lawn.  I made topiary rose trees with Styrofoam balls and dowelling: first, I cut the dowelling into three 4 long pieces and spray painted them dark brown.  I used three Styrofoam balls of different sizes for each tree.  I spray painted them dark green.  I made holes with a nail and then stuck the red roses into two of them and both white and red roses into the third.  I put the balls on the dowelling and stuck the dowelling into several plastic planters that I bought and painted red (these were filled with rocks to hold up the trees).  I made two card guards out of cardboard.  The card bodies were made from rectangles that I painted to resemble cards, and I also added arms (holding paint brushes of course!), legs and card symbol heads.  I attached garden stakes to their backs and placed them on either side of the third tree.  I also painted the Red Queen onto cardboard and attached a garden stake to her back.

The activity here was, of course, croquet!  I bought plastic flamingos to use as mallets and painted croquet balls to resemble rolled up hedgehogs.  For the prize, I put together a bag of black and red candies (licorice, hot tamales, cinnamon hearts, black and red jelly beans, etc) and tied it with a ribbon.  We also had a card tournament in the grass (we played cheat, but you could play something else, too), and the prize was a deck of giant playing cards!

The next area was the Tulgey Wood.  My house is surrounded by thick woods, and we found a perfect clearing for the main section of the Tulgey Wood.  I painted Tweedledum and Tweedledee onto cardboard and set them up using garden stakes attached to their backs.  I also made a sign post out of dowelling and painted signs reading This way, That way, Wrong way and Right way that I nailed on.

The activity was a Wonderland Nature Hunt.  I printed out pictures of all of the different Tulgey Wood creatures (one of each for each guest), cut them out, and laminated them.  Here is a list of all of the Tulgey Wood creatures: cagebird, shovel bird, musical frog, pencil bird, sweeping dog, umbrella vulture, horn duck, mome rath, harmonica owl, rocking-horse-fly, glasses bird, hammer bird and mirror bird.  I hid these all around the clearing and surrounding woods.

Each guest was given a field guide that I had put together, and the first person to find one of each creature won a set of mini tea cup candles. Finally, the guests arrived at the mad tea party!  I set up a long table and added a pink table cloth.  I hung pieces of transparent fishing line between the trees around the table and hung paper lanterns in different shapes and colors, like in the classic Disney movie.

To decorate the table, I put together tiny flower arrangements and put them in tea cups.  I found an old, ornate tea set at the thrift store and painted the pieces pink using foodsafe paint, which is nontoxic.  I wrapped the cutlery in bright floral napkins and wrapped sparkly pipe cleaners around the rolls like napkin rings.  I sprinkled wrapped candies and glitter all over the table for decoration.  In several scenes in Alice in Wonderland, Alice eats a cake that makes her grow.  For these growing cakes, I made petit fours and covered them in fondant in various pastel colours.  I made little flags reading Eat me to decorate them.

I also made Mad Hatter's Top Hats: I melted dark chocolate and dipped plain, round biscuits as well as marshmallows in it.  I stuck the marshmallows on top of the wafers (to look like a top hat).  I made cherry tarts and covered in white glaze with a maraschino cherry on top (like the Red Queen's famous tarts).   I made cupcakes and decorated them with colorful candies and little marzipan tea pots that I'd made.

I served all of the food on cake stands of varying heights, and the table looked fantastic!  Other than eating, the guests got to decorate their own top hats!  I bought top hats at a discount store, but you could also make them out of cardstock.  To decorate the hats, I filled a tray with spools of extra wide ribbon, oversized tags to decorate (like the one on the Mad hatter's hat that says This style 10/6), loose glitter, glue, fake feathers, fake flowers, cloth bows/ rosettes and markers.  They turned out really well!  It was a sleepover party, so the guests were staying for dinner.  Naturally, it being a MAD tea party, we had dinner after all of the sweets (a backwards dinner!).  We opened presents, then we played some more cards, and then we had cake.

Actually, instead of cake, my mom made me a chocolate torte royale.  It has a meringue base, which is coated with dark chocolate on the inside, and then filled with a sort of chocolate mousse.  To decorate the top, we piped HAPPY UN-BIRTHDAY EVERYONE in dark chocolate onto a tray (with a piece of parchment paper over it) and froze it, then peeled it off.  We used thin, twisted candles and a big flower-shaped tea light in the center.  Afterward, we watched Tim Burton's Alice in Wonderland.  There are lots of different versions of Alice in Wonderland that you could watch, including the 1933 live action version, the 1951 animated Disney film and the 1972 live action version.

PARTY FAVOURS: I filled colorful gift bags with a plastic tiara labeled Wear me" a book mark (which I made by printing an illustration from the book onto cardstock and embellishing it with glitter and stickers) labeled "Read me" a small glass bottle of gingerale labeled "Drink me" and a cello-wrapped sugar cookie with "Eat me" in icing.     It was a lot of fun and I hope I've given people a few ideas! " 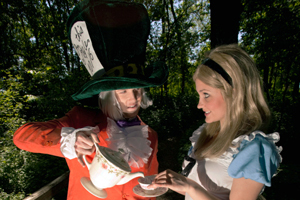